So You Think Leaving Is Easy?

For all those out there who think our life as expats is nothing but party after party, this post is for you!

As you know, we live in the jungles of Papua. As you know, it's also a rain forest. But when you combine NO rain in a rainforest filled with vegetation , and fire, you pretty much end up with a disaster!  So combine folks burning down the forest to make way for palm oil plantations and absolutely no rain for the last month... Well that combination spells disaster... eventually!

This disaster came during one of the most highly traveled times of the school year, October break. There was a mad rush of people who left site to get out for their two week break. Thankfully, for me, we were not going anywhere because Teddy was coming back to site!!  I really do hate traveling when there are so many people trying to get out!

Chris left site Tuesday, October 13th, for his shoulder check up in Singapore. This worked out well for us as we could fly Teddy to Singapore that weekend to fly back to site with Chris because it was Ted's fall break. Since Chris and Teddy weren't due back until that weekend, I really didn't pay attention to what was going on in way of flights and choppers. I played cards and did a whole lot of nothing while Chris was gone.

Well it got to be Friday and I started hearing how people were stuck in the lowlands because planes were not able to land due to all the smoke and haze from the fires miles and miles away. So that's when things started to get serious with travel to and off the island.

Chris and Teddy were suppose to leave Singapore Saturday night to be in Tembagapura Sunday morning. We knew we now had to make an alternative plan. No flights were coming in! And absolutely no one knew when flights were going to resume. So Ted and Chirs flew to Bali, Saturday night, to sit and wait...

Tuesday morning came and Chris and Teddy got lucky!   We missed having Teddy home for the whole week, but he made it for a few days and we were grateful for that!

So Teddy's home and things get worse with the fires and drought!  Who would have thought?!?! We live in a rain forest that gets 300+ inches of rain a year!!  Now there are no planes coming in or going out... Well, I do believe one other one made it, maybe on Thursday... But still, when you have 1000+ people trying to get out and 1500+ people trying to get in, one plane just doesn't cut it!

It is now Friday, October 23, Teddy and I are were originally scheduled to fly to Bali on the 24th so he could get on a flight the 25th and head back to school. I would then fly back to Papua the night of the 25th. Well late afternoon on Friday we get an email from Garuda stating that our flight was cancelled and rebooked on Mondays flight. Ok, no problem. We figured Teddy would be a little late for school, so that's ok if he missed two days.

Chris, in his forward thinking ways, thought he should book Teddy on an Airfast flight to leave as early as possible just in case Garuda doesn't fly. We also had decided that Teddy would go by himself to Bali because if I were to go with him, I would then be stuck out until who knows when. Thankfully one of Teddy's teachers, Mr. James and family, were "stuck" in Bali and said that Ted could camp out with them if he ever got off the Island.

So at this point, we had tickets booked on Airfast for Sunday to Bali and Monday to Cairns Australia, and Monday to Jakarta. We also had our Garuda ticket that was changed to Monday. Oh, but I forgot, Saturday night we received another email from Garuda stating that Teddy's Monday flight was going to depart from Jayapura. Huh!  Well, I have no idea how we are going to get Teddy to Jayapura, because nothing is flying to Timika, but we won't worry about that for the time being... We have three other flights to some other place in the world... We just need to get Teddy off the island!

The other information that you need to know for the rest of the story to make sense is that Garuda had cancelled all of their flights to Timika until October 30th!  The company on the other hand decided to base all their flights to Timika out of Makassar. It's about a two hour flight...  Employees were to get to Makassar and then would eventually get on an Airfast flight to Timika.

I must say, at this point, we were not freaking out at all. We just figured it's more time spent with Teddy and he will get back to school eventually!

Holy Cow!! I think this is the most I have ever written!!

Anyway, Saturday the 24th, Chris and I decide that Teddy and I should go down to the lowlands, as scheduled, to see if Ted will actually get on a plane. That evening we heard that one Airfast plane landed but the other two that were scheduled to land turned back to Makassar, half an hour out of Timika!  But one plane landed, so that was progress and gave us hope!

Yippee!!! Finally Late Saturday afternoon we got rain!! Lots of rain!! Like a half inch in 10 minutes! That night it rained 1.5 inches!!!  We were praying we had our rain forest back! And... We were praying the lowlands received just as much rain to knock some of the smoke out of the sky and we could get planes in again!!

Sunday morning, like any other day to get off the island, Ted and I go to the helipad for check in at 5:00 am. There is a wall of clouds up through the valley!  No choppers today, so in the armored convoy we go!

The road to the lowlands was a sloppy mess of mud from all the rain we had the night before, but the minute we hit the lowlands, right where the fork in the road was to either go to KK or to the airport, well it was bone dry!!  Going to KK was wet, but going to the airport was as dry as the Arizona desert!  Unbelievable!

Our hopes were not squished yet as the visibility was still not too bad in my opinion. Like if I had to land an airplane on the road we were driving on, I would have been able to see at least a mile
or two ahead of us. Yeah, it's probably a good thing I am not a pilot! 😉

So finally we get to the Rimba, our flight was changed from 11:00 to 1:45. We had some breakfast and thought we would just take our time getting to the airport. Well we got a message saying that it would be better for us to be checked in as soon as possible because if the flights came from Makassar, we wouldn't want to get caught up in the masses of people trying to check in!  So we did. And then...

And then after all this waiting, you see people starting to get up from their chairs and walking quickly to the window and then all of a sudden there is a massive CHEER breaking out in the airport!!  A plane has finally landed!! Now for the 50 million dollar question... Is it the plane that is going to Bali with Teddy on it?

The planes are here, but the saga doesn't end... Now to see if there is a Malaysia airlines ticket available to get Teddy back to school!  Not to worry... It was almost too easy...  Ted is booked on the 1:00 flight out of Bali Moday, only a day late thanks to a lovely app on my global communication device! That was almost too easy! :)

Teddy is finally off and I am going to try to make my way back to Tembag thanks to a late armored convoy up the hill. I mean, after all, we need to get the three plane loads of people somewhere and there is definitely not enough accommodations at the Rimba or in Timika!

So after leaving my house at 5:00 am, I finally arrive back home at 9:30 pm. Teddy is off the island, Mr. James is picking him up and returning him to the airport Monday morning. Ted got to Penang Monday night, only one day late!

And now it is Wednesday morning and I am getting my feet rubbed while typing this all on my phone because I have no Wi-Fi at home!  Life is back to "normal" for now! :)

If you would like to read the trials of a friend's family getting back to site, click on these links:

100 Things To Do In Makassar

Here are the only pictures I have from all of it!  This was the haze in the sky in Tembagapura Saturday (24th) morning! If it was that bad up here, it had to have been horrible in the lowlands! 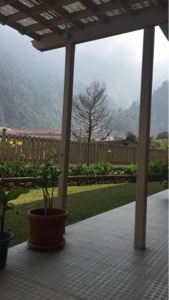 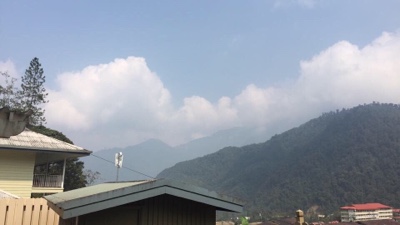 He has made everything beautiful in its time. He has also set eternity in the hearts of men; yet they cannot fathom what God has done from beginning to end.